The Snowman on Stage 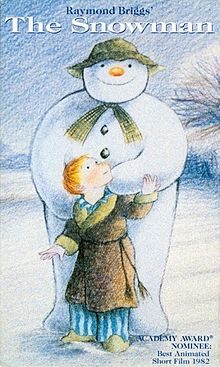 There is a list of things without which Christmas would not be complete: a tree, turkey and carols. And since 1982 The Snowman by Raymond Briggs has been part of that list. The Snowman started life in 1978 as a picture book which was a runner up for the Kate Greenaway Medal and won the Lewis Carroll  Shelf Award in 1979.

But it was the 1982 animated film adaptation that made The Snowman the Christmas essential it has become. The 26 minute film was an early production for the (then) new British TV Channel 4 and was first broadcast on December 26th 1982. The plot of the film differs from the book somewhat, with a visit to Father Christmas at the north pole added – in fact Christmas does not feature in the picture book at all.

A vital ingredient in the film was Howard Blake‘s marvellously seasonal score with a stand-out in the form of the only song, Walking in the Air, which forms the main musical theme. The soundtrack recording of the song was recorded by chorister Peter Auty though it is often wrongly attributed to Aled Jones whose later and hugely successful recording launched his career

The ingredients that have made the film into a Christmas classic are simple: a heart-warming tale of discovery, friendship and loss told through beautiful stop-motion animation and set to Howard Blake’s wonderful score. Critically the film contains no dialogue – the story is told entirely through the animation and music. The only words in the entire film are those of the title song, Walking in the Air and those are incidental to the story. So the film can be understood by anyone without language getting in the way and as a result it has become popular around the world.

The film was quickly adapted for stage by Anthony Clark, and appeared for the first time in 1986 at the Contact Theatre in Manchester, UK.  Further UK productions followed in Birmingham and Edinburgh and since 1997 London’s Sadler’s Wells dance company has staged an annual production at the Peacock Theatre.

We would love to bring you the script – but of course there isn’t one!  The stage adaptation, like the film and book, have no words and the story is told entirely through music and dance. But even though there is no script for this wonderful tale we still think it is one of the very best Christmas stories for kids and adults alike.